Foreign Minister Mohammad Javad Zarif says the 2015 nuclear deal, also known as the Joint Comprehensive Plan of Action has only been implemented by Iran not any other signatory to the deal.

TEHRAN (Iran News) – In a tweet late on Tuesday, Zarif said Tehran is the only participant to the JCPOA to have fulfilled its commitments under the landmark accord and that the rest of the signatories have failed to deliver on their obligations.

“#JCPOA IS the comprehensive plan concluded by E3+3 (incl the US) & Iran. The “C” stands for COMPREHENSIVE. It has been implemented only by Iran,” he wrote.

The top diplomat added, “Instead of posturing, US & E3 must finally live up to their commitments made, but never fulfilled.”

He warned that Iran will reciprocate the moves by the JCPOA participants. 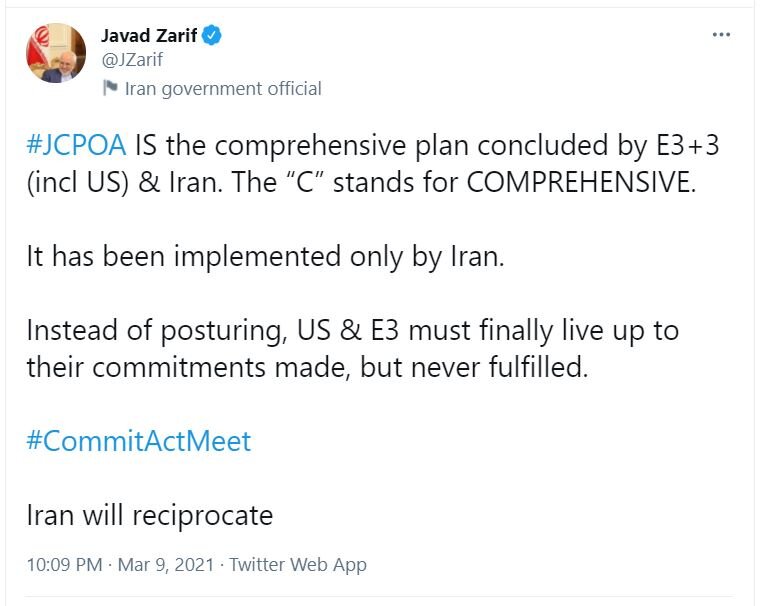 In a blatant disregard for the fact that Washington was the party that unilaterally quit the deal in 2018 and should return to compliance, some 140 members of US congress wrote earlier in the day a letter to US Secretary of State Anthony Blinken and urged him to pursue a “comprehensive” deal with Iran.

The US under ex-president Donald Trump pulled out of the agreement in 2018 and imposed the “toughest ever” sanctions on Iran as part of his so-called “maximum pressure,” which tried in vain to force Iran back to the negotiating table for talks on a “better deal.”

Despite throwing verbal support behind the JCPOA, the European parties to the deal — France, Britain, and Germany — ultimately succumbed to Washington’s pressure and failed to fulfill their contractual commitments to Tehran, mainly by confronting the American sanctions.

That promoted Tehran to begin a set of retaliatory measures in several stages as part of its legal rights stipulated in Articles 26 and 36 of the JCPOA. The latest such measure was the halt in the implementation of the Additional Protocol to the NPT Safeguards Agreement, which was required by the parliament-adopted law.

Supreme Leader of the Islamic Revolution Ayatollah Seyed Ali Khamenei underlined that the ongoing talks between Iran and the Group 4+1 (China, Russia, Britain and France plus Germany) should not take long.

Iranian Deputy Foreign Minister and top negotiator Seyed Abbas Araqchi underlined that his country would never allow other parties to prolong talks underway in Vienna, and warned that negotiations will continue only if they prove constructive.

Iranian President Hassan Rouhani in a phone conversation with his Turkish counterpart Recep Tayyip Erdogan underlined that cooperation between Tehran and Ankara can lead to the resolution of different problems and crises in the region.

Two European countries and three regional countries have asked to purchase homegrown coronavirus vaccine (COVIRAN BAREKAT), Mohammad Mokhber, the head of the Headquarters for Executing the Order of the Imam has said.