Iranian Foreign Minister Mohammad Javad Zarif welcomed a call by his Qatari counterpart for negotiations between Tehran and Persian Gulf Arab states in order to patch up their differences.

“As we have consistently emphasized, the solution to our challenges lies in collaboration to jointly form a ‘strong region’: peaceful, stable, prosperous, and free from global or regional hegemony,” the top diplomat added. 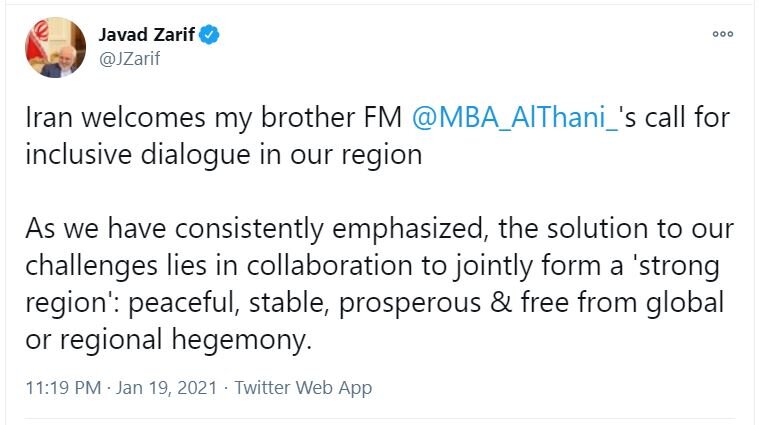 Al Thani said on Tuesday the time was right for Doha to broker such talks, and that he has long called for a summit between leaders of the six-member council and Iranian officials.

He said his government was “hopeful that this would happen and we still believe this should happen,” noting that this is also a desire that’s shared by other PGCC countries.

Back on December 23 last year, the Qatari foreign minister called for a de-escalation of tensions in the Persian Gulf region and dialogue between Arab countries and Iran.

Last day, Mohammad Javad Zarif made the remarks, noting that the Foreign Ministry has adopted legal measures in Iran and Iraq regarding the assassination of Lt. General Soleimani and the relevant reports have been presented to the Iranian Parliament.

He went on to say that Iran does not seek tension or war and the actions of the outgoing Trump administration will not affect the will of the Iranian nation.

“If anyone wants to invade Iran, they have to look at the history of previous aggressions, however, I think that our deterrence power will be effective in the last days of the Trump administration,” Zarif noted.

He further stressed Iran’s support for the territorial integrity of the Republic of Azerbaijan in the Nagorno-Karabakh conflict and maintained that the Islamic Republic is opposed to launching attacks on residential areas, especially the city of Ganja, which is considered a historical heritage.

Tehran, Seoul agree on mechanism for return of frozen assets

Iraqi sources reported that the US military base in Ain al-Asad was targeted by rockets.

Tehran, Seoul agree on mechanism for return of frozen assets

Iranian Foreign Minister Mohammad Javad Zarif said that the mechanism for returning Iranian assets from South Korea has been agreed upon by the parties.

The trade volume of Iran and Russia has surpassed $1b in ten months of the current Iranian calendar year which will end on March 20.

For the Love of Shia, Is It Really for Islam?

For the Love of Shia, Is It Really for Islam?

For the kind information of my addressees, I should hereby mention that recently a movie with the title of “The Lady of Heaven” in genres of drama, action and historic has been screened worldwide.