We condemn US’ sanctions against Turkey

TEHRAN (Iran News) – “US addiction to sanctions and contempt for international law at the full display again,” Zarif tweeted on Tuesday.

Expressing support to neighboring Turkey, the diplomat added, “We strongly condemn recent US sanctions against Turkey and stand with its people and government.” 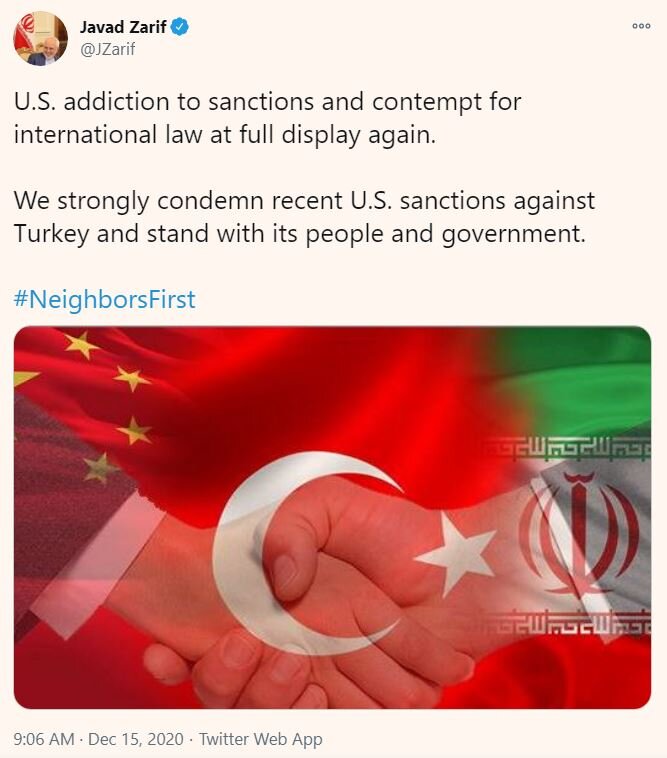 The US Treasury announced on Monday fresh sanctions that targeted Turkey’s defense procurement agency, known as the Presidency of Defense Industries, and its senior officials, including its president.

The sanctions come a year and a half after Turkey acquired a Russian missile defense system, which Washington claims to be a violation of US sanctions law.

Enemies Locked in a No-Win Situation

After years of on-again, off-again talks with the West over a 2015 nuclear deal that overwhelmingly dominated its foreign policy, Iran is slowly moving toward a broader foreign policy that is not confined to the tattered nuclear deal.

After Iranian President Ebrahim Raisi virtually addressed the 76th United Nations General Assembly, many political analysts commented on the contents of his speech. However, what is interesting is that the authors of the JCPOA are crying over an empty coffin.

Enemies Locked in a No-Win Situation

The enemies of the Islamic Republic are facing a lose-lose situation with a sense of “strategic frustration”, Commander of the Islamic Revolution Guards Corps Major General Hossein Salami said.

Head of Iran-Syria Economic Office in Adlib of Syria says despite good relations between the two countries, the trade between them is not satisfactory, adding that Turkey has 26 percent of Syria’s market through the smuggled goods.