Oil Jumps to Highest Since February

Oil Jumps to Highest Since February Amid Stimulus Optimism.

TEHRAN (Iran News) – Oil surged to the highest in nearly 10 months in New York alongside a broader market rally as breakthroughs on U.S. stimulus talks combined with the Covid-19 vaccine rollout stoked optimism around a demand revival. U.S. benchmark crude futures rose 1.3% on Tuesday after Senate Majority Leader Mitch McConnell said Congress will not leave for the year without a spending package, as talks continue to finalize Covid-19 relief. Meanwhile, Moderna Inc.’s vaccine was deemed safe by U.S. regulators, clearing the way for a second shot to quickly gain emergency authorization.

Prices edged lower following settlement after the industry-funded American Petroleum Institute was said to report domestic crude supplies rose by almost 2 million barrels last week. Earlier, the International Energy Agency trimmed its demand forecast for 2021 and said the crude oil glut left behind by the coronavirus pandemic will not likely clear until the end of next year. 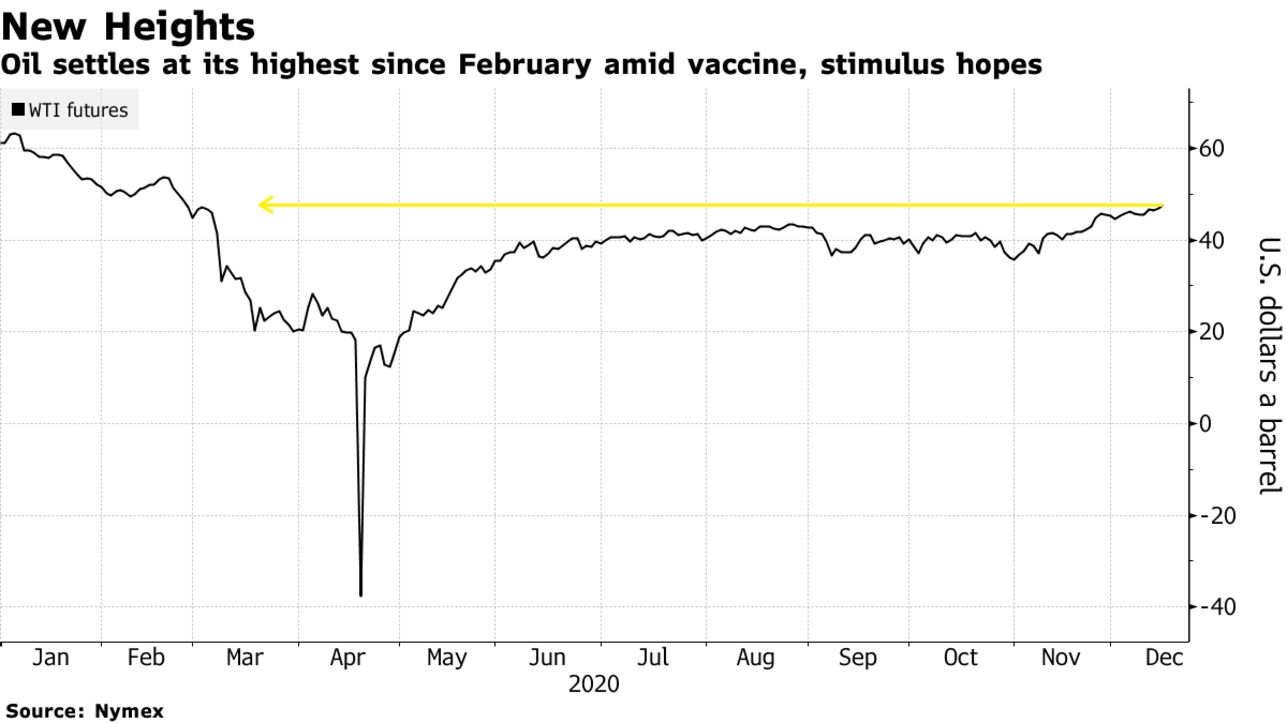 Oil futures have surged recently to highs not seen since the pandemic sent prices for a tailspin, supported by indications that a widespread vaccine rollout will boost the economy and aid demand. Imported containers loaded at the Port of Los Angeles in November increased by roughly a quarter year-over-year, signaling a bump in demand. Still, the IEA’s dismal demand projections follow OPEC’s decision to cut its own forecasts for consumption in the first quarter of 2021 as the group and its allies prepare to start returning some supply to the market from January. Meanwhile, in the U.S., the number of Americans taking road trips during this Christmas is set to decline as much as 25% as people stay home amid soaring virus cases, according to GasBuddy.

“People are forgetting that there’s a couple of triggers that have to happen before oil demand really comes back,” said Stewart Glickman, energy equity analyst at CFRA Research. “The first half of the year we’re going to see some resurgence of weakness in oil demand because it’s going to take time before everybody feels comfortable enough for things to start reopening fully.”

The nearest portion of the futures and swaps markets are highlighting the mixed outlook. Brent’s prompt time spread was on the verge of a flip back into contango, where near-dated contracts are cheaper than later ones. That compares with a bullish backwardation of as much as 18 cents last week. At the same time, the Middle East Dubai benchmark has been moving further into backwardation.

The API report also showed refined products rose last week, with distillate supplies notching a 4.76-million-barrel build last week. If confirmed by the Energy Information Administration’s storage figures on Wednesday, that would be the third week in a row that distillate inventories rose after more than two months of consecutive draws.

Iran Trade With EAEU a Smart Action to Encounter Sanctions

Mohammad-Reza Karbasi believes the trade between Iran and the UAE is a win-win one for both sides, adding both sides are fully aware of it and they should take advantage of capacities desirably.

Iran Trade With EAEU a Smart Action to Encounter Sanctions

Mohammad-Reza Karbasi believes the trade between Iran and the UAE is a win-win one for both sides, adding both sides are fully aware of it and they should take advantage of capacities desirably.