Iran’s Ambassador to the United Nations said that there are “serious indications of Israeli responsibility” in the assassination of an Iranian scientist and it reserves the right to defend itself.

TEHRAN (Iran News)-Military – In a letter to UN Secretary-General Antonio Guterres and the UN Security Council on Friday, Majid Takht-Ravanchi wrote, “The cowardly assassination of Martyr Fakhrizadeh — with serious indications of Israeli responsibility in it – is another desperate attempt to wreak havoc on our region as well as to disrupt Iran’s scientific and technological development.”

“Over the current decade, several top Iranian scientists have been targeted and assassinated in terrorist attacks and our firm evidence clearly indicates that certain foreign quarters have been behind such assassinations,” the letter added.

“Warning against any adventuristic measures by the United States and Israel against my country, particularly during the remaining period of the current administration of the United States in office, the Islamic Republic of Iran reserves its rights to take all necessary measures to defend its people and secure its interests,” it said.

Referring to the significant role of martyr Fakhrizadeh in combating the COVID-19 disease in Iran, Majid Takht-Ravanchi said, “One of the latest services of Martyr Fakhrizadeh was his outstanding role in the development of the first indigenous COVID-19 test kit, which is a great contribution to our national efforts in curbing the COVID-19 pandemic at a time when Iran is under inhumane sanctions of the United States, strictly preventing our access to humanitarian goods including medicines and medical equipment.”

He also urged UN Secretary-General Antonio Guterres and the UN Security Council to strongly condemn the terrorist act and take necessary measures against its perpetrators. 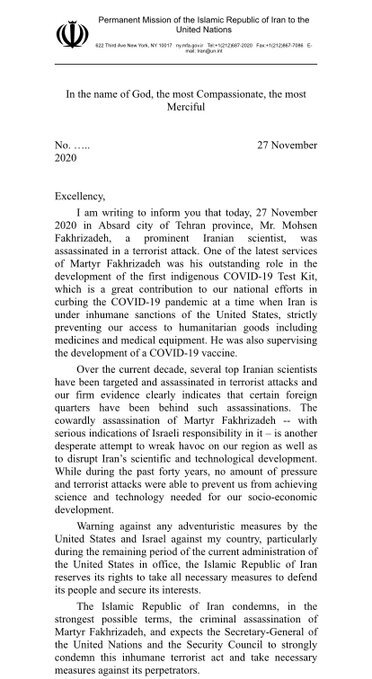 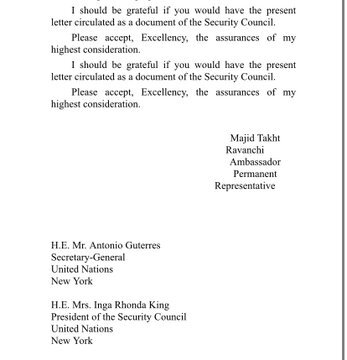 Fakhrizadeh-Mahavadi was targeted on Friday in a multi-pronged attack involving at least one explosion and small fire by several assailants in Absard city of Damavand County, Tehran province.

According to the Public Relations Officer of the Ministry of Defense, the prominent physicist, who headed its Organization of Defensive Innovation and Research (SPND), was sent to hospital immediately but was martyred due to the wounds he had sustained in the terrorist assault.

A senior adviser to the Leader of the Islamic Revolution says the US must lift all sanctions against Iran and that Tehran will not accept anything less.

Production of crude steel (steel ingot) in Iran has risen 13 percent from January-November, 2020, according to a report released by the World Steel Association (WSA).

US Secretary of State Mike Pompeo has canceled a trip to Europe at the last minute after some European politicians and officials were publicly critical of Donald Trump’s role in last week’s storming of the Capitol.

Energy Minister Reza Ardakanian has highlighted Tehran and Baghdad’s determination to raise the value of annual trade exchanges to $20 billion, pointing to the major role that the private sectors and a joint investment fund could play in working towards that goal.