The Embassy of the Islamic Republic of Iran in Kabul informed that a rocket landed in the precinct of the embassy on Saturday morning.

TEHRAN (Iran News) – The embassy informed in a tweet that the incident did not leave any casualties and all the personnel is safe.

It added that several shrapnels have hit the main office of the embassy and in some parts, windows are broken and facilities are damaged. 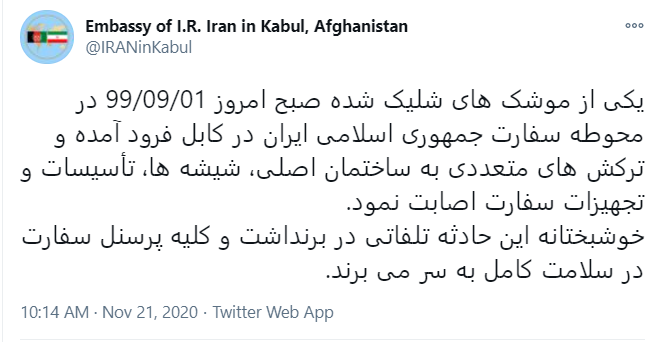 A series of loud explosions have shaken central Kabul, including several rockets that landed near the heavily fortified Green Zone where many embassies and international firms are based, officials said.

As the Guardian reported, there were no immediate reports of any casualties, but Saturday’s explosions occurred in densely populated parts of the Afghan capital.

Kabul police spokesman Ferdaws Faramarz confirmed “multiple rockets” had been fired, while photos on social media appeared to show damage to an external wall at a large medical complex.

The interior ministry said two small “sticky bomb” explosions had been reported earlier Saturday morning, including one that hit a police car, killing one policeman and wounding three others.

No group immediately claimed responsibility for the blasts.

Hajj and the struggle against the apartheid regime of Israel

Hajj and the struggle against the apartheid regime of Israel

One of the messages of Hajj is to fight racism. Everyone who performs Hajj must perform tawaf and sa'i. During tawaf, a pilgrim must also circle the tomb of Sayidah Hajar, which is attached to one part of the Kaaba. Then, he or she must perform sa'i, to run back and forth, from Safa to Marwah.

Leaders of Iraq and the United States have sealed an agreement on ending the latter’s combat mission in Iraq. Many Iraqi political circles have cautiously welcomed the deal, though it stopped short of ending the U.S. military presence in Iraq.

The Islamic Republic of Iran since its birth in 1979 has proved this point to the world that if there is a will there is a way for materializing your wishes and it has reinforced the slogan of “We Can Do It.”