Michael Klor-Berchtold pointed to the ending of his tenure in Iran as the ambassador of Germany.

TEHRAN (Iran News) – Michael Klor-Berchtold pointed to the ending of his tenure in Iran as the ambassador of Germany.

In a tweet on Tuesday, German envoy wrote in both Persian and English that “After 4 years in Iran it is time to say goodbye.”

He also posted an undated photo of himself sitting behind the wheel of a blue pickup truck in Iran. 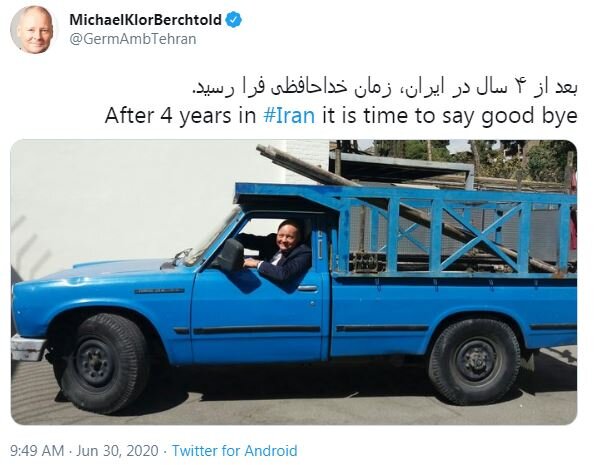 In early June, Deutsche Welle reported that Klor-Berchtold would resign earlier than scheduled to become the head of the economic department of the German Ministry of Foreign Affairs.

He has been the German Ambassador to Iran since 2016 and was originally scheduled to complete his mission till the end of 2020. His behavior was the source of some controversies during his time in Iran.

World Today Is in Dire Need of Honest Information

World Today Is in Dire Need of Honest Information

Congratulating the World Public Relations Day to all activists in the field, President Seyed Ebrahim Raisi said, "Public relations and communications are the beacons of the development of awareness and jihad of enlightenment in society and have an important role in informing the public".

For months the Islamic Republic of Iran and other signatories of the JCPOA, excluding the U.S., have been busy with talks in Vienna or indirectly through other channels to revive the JCPOA but the talks have come to a halt due to differences between the involved parties in the Vienna talks.