Why global protests are sweeping through the world

The demonstrations seemingly began with a single spark. In Chile it was a hike in metro fares. In Lebanon it was a tax on WhatsApp calls. In Hong Kong it was a proposed extradition bill. Iran News qoutes the story about global protests told by CNN. Now those flickers have ignited wider protest movements, lifting the lid on deeper inequalities, […]

The demonstrations seemingly began with a single spark. In Chile it was a hike in metro fares. In Lebanon it was a tax on WhatsApp calls. In Hong Kong it was a proposed extradition bill. Iran News qoutes the story about global protests told by CNN.

Now those flickers have ignited wider protest movements, lifting the lid on deeper inequalities, frustrations and lack of autonomy that go back decades. And the discontent doesn’t appear to be subsiding anytime soon.
Indeed, across the globe, activists are taking to the streets in highly organized, persistent movements to tell their leaders: this isn’t good enough.
For a spark to turn into something bigger, there needs to be “a much wider lack of trust in the political elite, a feeling of crisis of authority, and a wide variety of grievances and feelings of discontent,” said John Chalcraft, professor of Middle East History and Politics at the London School of Economics and Political Science.
That’s the case in Chile, Lebanon and Hong Kong, he added. These are now “sustained protest movements, continuing even after their initial grievance has been met.” 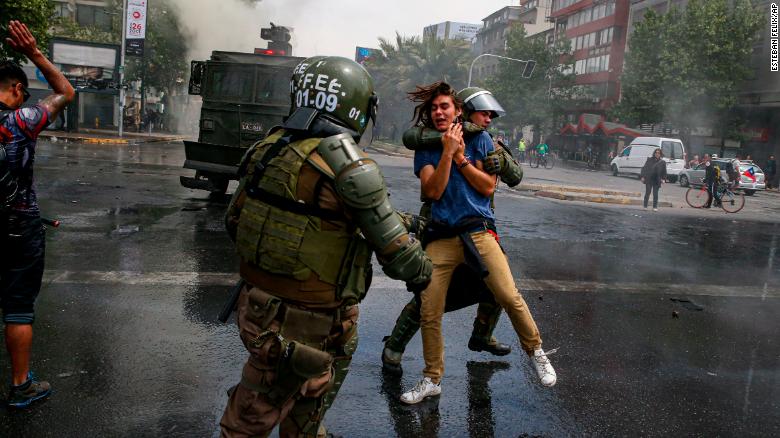 A demonstrator is detained by the police during a protest in Santiago, Chile, on Saturday.
What’s happening? Chile declared a state of emergency in the capital Santiago after widespread protests sparked by the proposed price hike for subway tickets a little over a week ago.
At least 18 people have died in clashes between protesters and security forces. Shops and business have been looted and set on fire, and metro stations vandalized and closed to the public in widespread demonstrations over living costs and rising debt in the usually stable country.
What’s been the state response? President Sebastian Pinera announced the suspension of the price hike Saturday. On Tuesday, he apologized for “decades” of accumulated problems and announced a new social and economic agenda but it did little to quell the unrest.
The government has responded by deploying thousands of police and armed soldiers to put down the unrest — the first time the military has been deployed since Pinochet’s military dictatorship ended in 1990.
What’s the bigger picture? Chile is one of Latin America’s wealthiest countries, but it also has one of highest levels of income inequality in the world.
Many jobs are informal or temporary, with young people and women among those struggling the most to find quality, skilled work. Calls for wider economic reform over a number of issues including pensions, healthcare and public education show the cracks in the country’s progress since its transition to democracy. 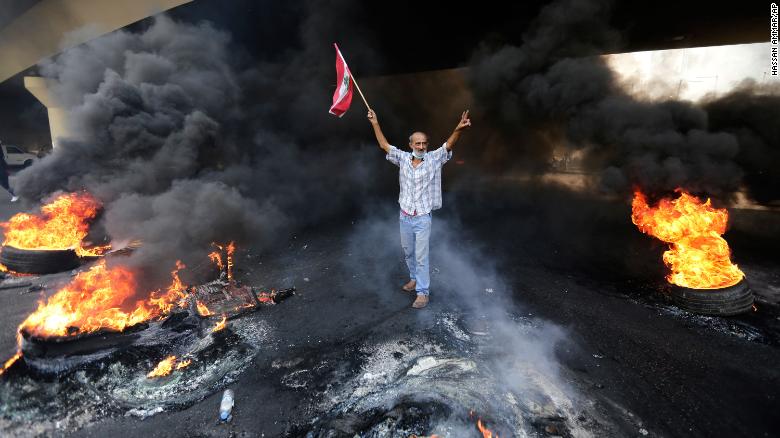 An anti-government protester makes a victory sign, while holding a Lebanese flag and walking past blazing tires during a protest on October 18.
What’s happening? Hundreds of thousands of protesters have taken to the streets across the country for anti-government protests that began last Thursday.
The protests were sparked by a proposed 20 cents per day charge for voice over internet protocol (VOIP) use, a feature used by WhatsApp, Facebook, and other applications.
Very quickly, the proposed VOIP tax had morphed into a larger rallying cry for the downfall of the government and drew out the largest demonstrations the country has seen since March 2005, when mass protests ended a decades-long Syrian military presence in the country.
What’s been the state response? The government has now scrapped plans for the VOIP tax.
It also approved an ambitious program that slashes officials’ salaries by 50%, levies large taxes on banks’ profits, scraps further austerity proposals, and seeks to stem big financial losses in the electricity sector, along with other reform measures. But the reforms do not appear to be appeasing protesters.
What’s the bigger picture? People in Lebanon, buckling under the strains of a rapidly declining economy, are taking aim at what they see as crony capitalism. Decades of corruption and government mismanagement by the country’s sectarian leaders have come at too hefty a price, Lebanese protesters say. 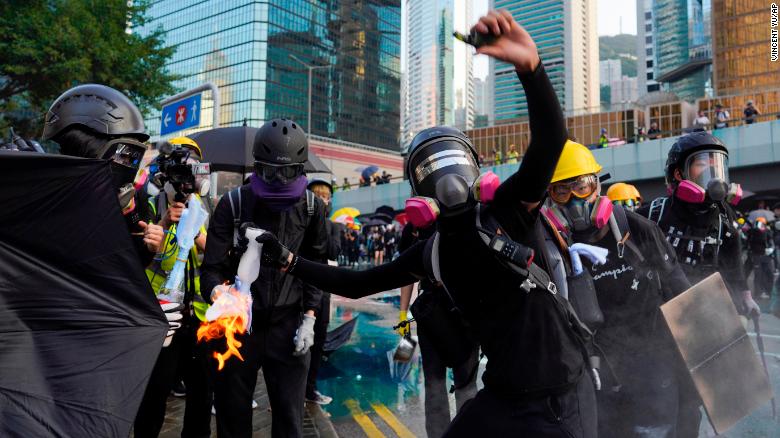 An anti-government protester throws a Molotov cocktail during a demonstration near Central Government Complex in Hong Kong, in September.
What’s happening? Hong Kong’s protests began in March, but they kicked off in earnest in June. They were sparked by widespread opposition to a now-shelved extradition bill that would have allowed extradition to China, but have since expanded to demands for full democracy and police accountability.
What’s been the state response? In September, Hong Kong leader Carrie Lam announced the withdrawal of the extradition bill after three months of large-scale protests, which have roiled the city and damaged its economy. That, however, did not stop the demonstrations.
What’s the bigger picture? Hong Kong belongs to China, but it has its own currency, political system and cultural identity. Many Hong Kong residents don’t see themselves as Chinese, but rather as Hong Kongers.
Ultimately, young Hong Kongers are concerned about China’s growing encroachment in the city — and the perceived threat to freedoms unavailable to Chinese mainlanders, such as the right to protest, the right to a free press, and an independent judiciary. This has led to the regular and increasingly violent protests in the usually peaceful city, resulting in more than 2,000 protesters arrested so far.
Short link :
https://irannewsdaily.com/?p=100897

The ongoing war in Ukraine triggered by Russia has started a fascinating debate among the experts; viewing the Russian military operations in Ukraine will alter the complexion of international politics, and posing a grave challenge to the Western democratic values.

Since the end of the Second World War, Finland and Sweden, have maintained strict policies of neutrality between Russia and NATO, viewing membership of The North Atlantic Treaty Organization as a provocation to Moscow.

The ongoing war in Ukraine triggered by Russia has started a fascinating debate among the experts; viewing the Russian military operations in Ukraine will alter the complexion of international politics, and posing a grave challenge to the Western democratic values.