The Iranian Foreign Minister Mohammad Javad Zarif has tweeted to criticize the US costly intervention in the Middle East in support of the Israeli prime minister.

“When it comes to conflict in our region, IT’S NOT ABOUT THE MONEY: Donald Trump confessed US has spent $7 trillion here, only to worsen the situation,” Mohammad Javad Zarif  wrote in a tweet on Saturday afternoon. 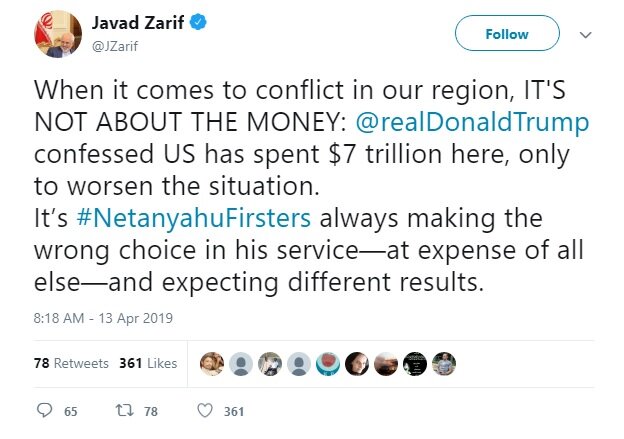 The top Iranian diplomat added that the US president’s costly and wrong support for the Israeli Prime Minister Benjamin Netanyahu could have repercussions. “It’s Netanyahu Firsters always making the wrong choice in his service—at expense of all else—and expecting different results,” he continued.

A day before Israeli general elections on which the US administration designated Iran’s Islamic Revolutionary Guards Corps as a terrorist organization, Zarif described the US move as a gift to Benjamin Netanyahu from Donald Trump to secure hawkish prime minister’s victory in the votes.

Zarif turns down Reformist appeals to run for president

Erdogan calls on international community to give Israel ‘strong’ lesson

Zarif turns down Reformist appeals to run for president

Mohammad Javad Zarif, Iran’s foreign minister, has announced he will not be running for president in the June 18 election, officially turning down a major appeal by the Reformist camp and potentially reshaping the race.

Erdogan calls on international community to give Israel ‘strong’ lesson

Turkey’s President Recep Tayyip Erdogan has denounced Israel’s attacks on Palestinians in Jerusalem al-Quds and the besieged Gaza Strip, calling on the international community to give Israel a “strong” lesson.

As the U.S. troops are preparing to leave Afghanistan and Iraq, the violence and terrorist attacks in both countries are on the rise and the recent bomb blast and bloodshed in Afghanistan once again showed that the foreign forces do not really like the regional countries to enjoy peace and stability, and through violence and bomb blasts they want to impose themselves on those countries.