Slovenia and the rest of the world celebrated the first World Bee Day on May 20, following successful collaboration between Slovenia and the Slovenian Beekeeping Association to have UN unanimously adopt the proposal.

On May 20, Slovenia and the rest of the world celebrated the first World Bee Day. On 20 December last year, the United Nations General Assembly in New York unanimously adopted the decision to proclaim 20 May World Bee Day. This is the result of successful collaboration between Slovenia and the Slovenian Beekeeping Association (as the initiator), and is one of Slovenia’s most prominent diplomatic successes. The main purpose of World Bee Day is to have at least one day devoted to raising awareness around the world about the importance of bees and other pollinators for humankind. At the same time, it is an opportunity for the profession, policymakers, industry and the general public to address the challenges facing bee conservation, and to outline specific activities to ensure their survival.

Wrapping up the celebrations, minister Dejan Židan highlighted the fact that World Bee Day was, for him, a very “emotional” event, as considerable effort, energy and work had been invested in the entire process of getting 20 May proclaimed as World Bee Day at the UN in December last year – indeed, he regards it as one of independent Slovenia’s greatest diplomatic achievements. Slovenia talks a great deal about bee conservation and about sustainable farming and living, with the rest of the world seeing our efforts as part of the global drive to combat hunger, with figures suggesting that 815 million people worldwide suffer from hunger. These are areas and countries where farming is not possible because of war or climate change. Globally, then, tiny Slovenia’s efforts to conserve bees and other pollinators are seen as extremely important factors in resolving humankind’s greatest problem – that of hunger. 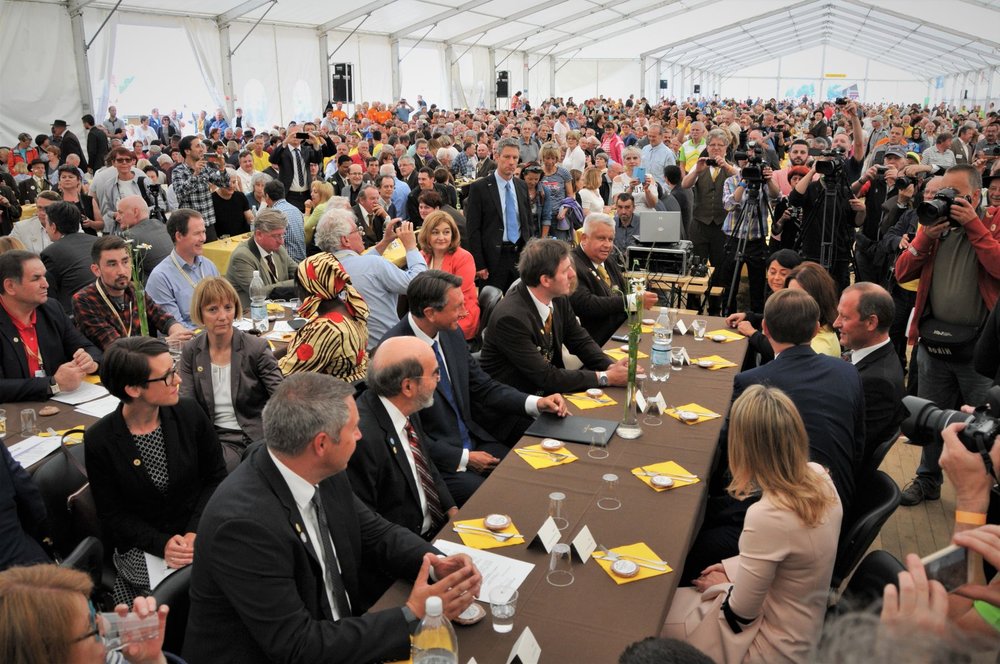 However, the proclamation of World Bee Day is only the start, with specific targets and objectives awaiting Slovenia. At the EU level, for example, we want bees to be declared an endangered species, as only then can we take the necessary measures that are currently not possible. The other goal is the preparation of a Programme of Excellence in Beekeeping, which is already under way, while amendments to the Agriculture Act also lay down the establishment of an international beekeeping academy, which will allow us to pool our apicultural knowledge for the first time and offer it to all those who wish to benefit from it.

A series of events took place to mark World Bee Day: on the morning of Friday 19 May, the Slovenian Beekeeping Association in Žirovnica organised an international beekeeping conference on the global challenges facing the profession, and on Friday evening there was a celebration in Višnja Gora to mark the unveiling of a statue of the “Carniolan grey”. Yesterday, 19 May, the Ministry of Agriculture, Forestry and Food organised an international ministerial conference in Brdo pri Kranju on the importance of bees and other pollinators, which concluded with the adoption by the ministers of a political declaration committing them to strengthening international cooperation in relation to measures to protect bees and other pollinators, raising public awareness, providing education about the issues and sharing good beekeeping practice. On 20 May, the main celebrations to mark the first World Bee Day took place in Žirovnica; these were organised by the Slovenian Beekeeping Association and the Municipality of Žirovnica, and sponsored by Slovenian president Borut Pahor.

To mark the first World Bee Day, the Bank of Slovenia has issued a special commemorative 2 euro coin, which will enter normal circulation throughout Europe. Janez Bizjak, winner of the public competition to design the coin, sought inspiration from World Bee Day and the world of bees, using the motif of a globe in the form of a honeycomb (or indeed, a honeycomb in the form of a globe).

Hassan Ruholamin, an Iranian artist whose paintings mostly revolve around stories from the history of Islam, has portrayed in his new artwork the arrival of Hazrat Masumeh (SA) in Qom.

Ashkan Rahgozar, director of the acclaimed Iranian movie “The Last Fiction”, has been selected as a member of the jury at the 7th Thessaloniki Animation Festival in Greece.

The acclaimed Iranian drama “Yadoo” was picked as best film at the 34th edition of the Isfahan International Film Festival for Children and Youth.