TEHRAN – A small group of scientists has unilaterally decided to send messages to any advanced alien civilization living in a star system 12.4 light years (over 70 trillion miles) away. The message, which includes pieces of music, math and technology, was transmitted to the GJ273 system over three days in October and includes instructions […]

TEHRAN – A small group of scientists has unilaterally decided to send messages to any advanced alien civilization living in a star system 12.4 light years (over 70 trillion miles) away.

The message, which includes pieces of music, math and technology, was transmitted to the GJ273 system over three days in October and includes instructions about how they should reply to us on a day 25 years from now.

The decision to actively send messages to aliens is controversial. There are two main avenues of thinking—the first, known as SETI (Search for Extraterrestrial Intelligence) is that we should actively look for alien life by listening out for signals, the second that we should be sending out messages so any advanced lifeform out there would be able to find us.

The latter—which has become known Messaging Extraterrestrial Intelligence (METI)—has some fierce opponents, including renowned physicist Stephen Hawking. He says alerting aliens to our presence could be a fatal error:  “If aliens visit us, the outcome would be much as when Columbus landed in America, which didn’t turn out well for the Native Americans,” he warned.

Another problem is deciding what we should say in a message to aliens. How can one small group of people be responsible for deciding how the whole of Earth is represented in a single message?

Despite these concerns, they forged ahead and it was announced the messages had been sent at Sónar, a festival of music, creativity and technology held in Barcelona, Spain. Sónar initially came up with the idea for the project, and asked METI and the Institute of Space Studies of Catalonia (IEEC) to collaborate on it.

They sent out messages to GJ273—or Luyten’s Star—a red dwarf with a potentially habitable exoplanet called GJ273b. The message was beamed towards the system on October 16, 17, and 18. It took 11 minutes each day, with the total transmission lasting 33 minutes. 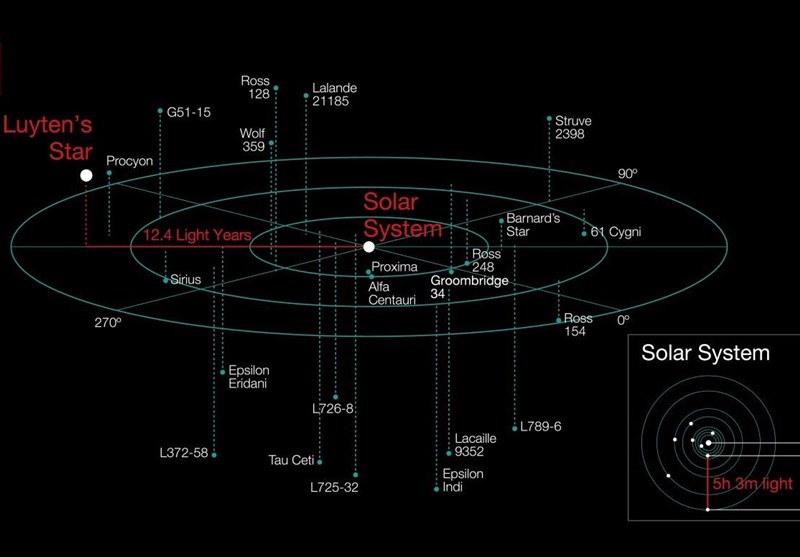 The message starts with basic principles then builds up to more complicated concepts. It also makes a direct link between the type of radio signal sent and the scientific content included, providing clues so the aliens can interpret the messages accurately. Repeating the message three times should mean the extraterrestrials can correct for any errors introduced over the messages’ long journey through space.

Another feature of the message is a “cosmic clock” that shows the passage of time. Each of the three messages sent over three days has a slightly different clock indicating how a specific period of time has passed since the last was sent.

The next phase of the project—named Sonar Calling GJ273b—will see an expanded message sent to the same star. Included in this message to any alien lifeforms listening is the date when astronomers will be listening out for a reply: June 21, 2043.

In an email interview, Douglas Vakoch, president of METI, told Newsweek about the initiative and why they went ahead.

Q: There is an argument against sending messages—do you think your announcement will upset some people within the SETI community?

A: Everyone engaged in SETI is already endorsing transmissions to extraterrestrials through their actions. If we detect a signal from aliens through a SETI program, there’s no way to prevent a cacophony of responses from Earth. And these wouldn’t be responses to a possibly habitable exoplanet, but to a star system where we know there is intelligent life. There’s no way to enforce the SETI protocols that call for consultation before replying. Once the news gets out that we’ve detected extraterrestrials, anyone with a transmitter can say whatever they want.

Q: Do you think some people (non scientists) will be worried we’ve sent messages to aliens?

A: When we’re not clear how risky an activity is, we rely on the most vivid images that come to mind to help us decide. Cognitive psychologists call it the availability heuristic. We rely on the images that are most available to us—the vivid ones—and take that as the truth. What could be more vivid than the image of an alien invasion? But once we step back, take a breath, and analyze the situation, we realize there’s no added danger of an alien attack if we let them know we’re interested in having an interstellar conversation. When people learn more about the project, they’ll realize we have nothing to fear.

Q: So why shouldn’t we be worried?

A: Any civilization that could travel to Earth to do us harm could already pick up our leakage television and radio signals. So there’s no increased risk of alerting them of our existence. Earth’s atmosphere has been giving off evidence of life’s existence for two and a half billion years, thanks to the oxygen in our air. So any civilization that’s paranoid about competition has had plenty of time to come to Earth and wipe us out. That hasn’t happened.

Q: How did you decide what to say in the messages?

A: Extraterrestrials won’t speak English or Spanish or Swahili. So we need to look for a truly universal language. Our message is written in the language of math and science. Over the centuries, scientists and mathematicians have repeatedly taken a vote on the most essential concepts needed to explain the nature of the universe. Those are the ideas that are at the core of our message.

Q: If there is alien life on GJ273b, how soon could they feasibly respond?

A: It will take a bit more than a dozen years for our message to reach GJ273b, and the same amount of time for their response to travel back to Earth.

Q: What is the precise date that has been selected for when we will be listening for a reply? How was this date chosen?

A: We’ll be listening for a reply on June 21, 2043. As we make plans for listening for responses, we should look for dates that will have significance even with changes in nations and cultures. By asking for a response that would arrive on the summer solstice, we’re setting a time that’s connected to the cycles of the Earth.

Q: Are you hopeful we will hear back then?

A: The only way we’ll get a reply back from GJ273b is if the entire galaxy is filled with life. It’s certainly possible we’ll get a reply, but more likely we’ll need to ping many, many more stars before we get a response.

My hope for first contact operates on longer timescales. If we can mount a sustained transmission campaign that targets not a single star—but hundreds, then thousands, then millions of stars—then I have hope that sometime in humanity’s future, we’ll finally receive a reply.

Q: What sort of dialogue could we expect to have with an alien civilization?

A: We won’t be having a snappy back-and-forth with aliens. Given the distances between the stars, even when our signals travel at the speed of light, it’s guaranteed to take at least several years for each exchange, and it could well take centuries or millennia.

TEHRAN (Iran News) – A fighter jet of the Iranian Air Force crashed in the northwestern province of Ardabil on Wednesday, and the pilot is still missing. The MiG-29 fighter jet had taken off from an airbase in the city of Tabriz and was patrolling in the airspace of Ardabil Province when it crashed in […]

A research team at Amirkabir University in collaboration with a team at the University of Minnesota have developed a nanocrystal which can accelerate the wound healing process.

NASA scientists used a high-temperature "oven" to simulate conditions that might be found in planets outside the solar system.

Tehran and Bangkok emphasized the need for strengthening bilateral relations in the field of municipal and urban services.